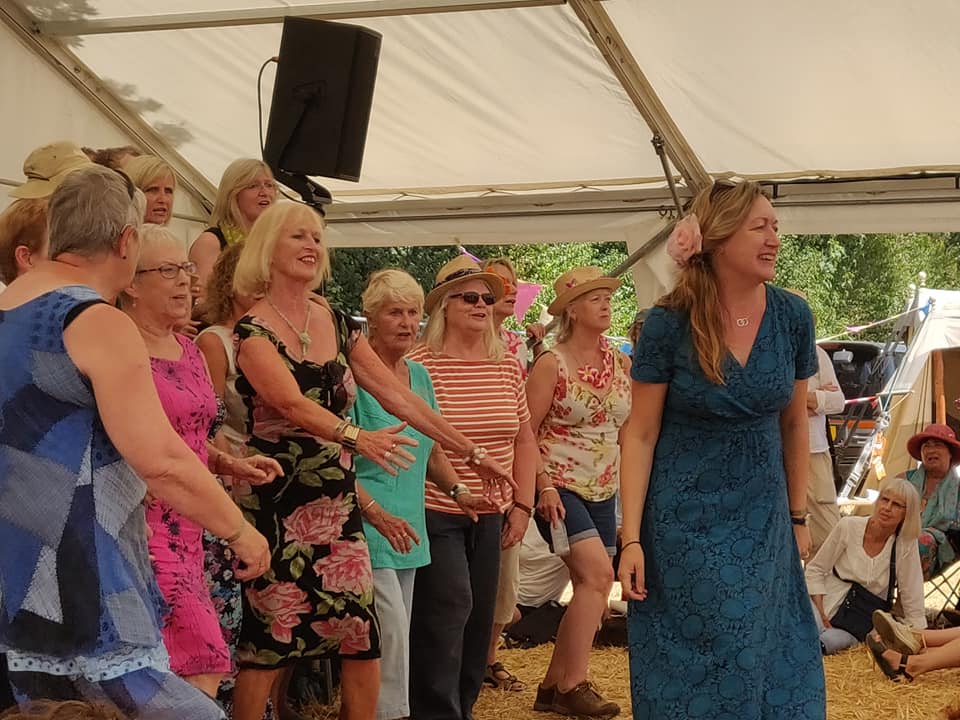 While many people during the lockdown have been getting to grips with Zoom calls for business meetings or to keep in touch with loved ones, Janet Ayers has harnessed the technology to hit just the right note.

Well known as a performer with the popular beat combo, the Dave Baker Project as well as Hudson and Lestrade, her Victorian alter ego, pairing with musician husband Matt, Janet runs the Southsea Community Choir.

Janet has also been serenading her neighbours with her rendition of ‘Somewhere Over the Rainbow’, just before the clapping begins on Thursday evenings.

Since she first started performing as a musician and singer, Janet has always enjoyed the collaborative creativity of performing in a group and she did not want to lose the wonderful vibe that has developed in the choir since it was formed 12 years ago.

Janet explained: “Zoom is designed for meetings with one person speaking at a time, which isn’t how a choir works. The technology means it sees sustained sound as interference and it can’t process all the data so sounds come back very slow.

“So initially, we just used Zoom as a social thing so we could keep connected. But through listening to the experiences of friends within the Natural Voice Network, I discovered there might be a way to make it work.”

Having updated her phone so she could have an acapella app, she was able to record an audio track to play on the Zoom call and by muting the participants, choir members can sing along with Janet.

“We had 23 people on the call this week and the feedback has been great. There are amazing possibilities if you use the technology in a creative way,” said Janet.

Singing and performing has been part of Janet’s life from an early age. Growing up in London, she began playing the violin at school and was soon performing in the school orchestra.

“It was free to play a musical instrument at school and there was Saturday morning music school from the age of nine to 18. I loved music lessons and loved playing with a group.

“I was never very keen on practising on my own, I was much more tuned into what can be created in a group rather than the technical side of music,” she said.

Back in February, Janet led a session for the Women’s Refugee Support Group in Portsmouth, She took along a djembe drum and encouraged the women to sing, dance and drum.

“We were in quite a cramped space so the planned circle dance became everyone making up their own dances – it was hilarious.

“The organisers asked me to do it again in the lockdown. Using Zoom I was able to do call and response signing and we were all dancing and having a wonderful time.

“One woman who was caught in the lockdown in London, joined us from her stationery car.

“Whereas before we used to say can you make this date and time in this particular room? Now with Zoom we are saying, we can come to you.

“Without the technology, it would have been quite depressing but we have been able to adapt and be together in a different way,” said Janet.

Listen to Janet sing ‘Somewhere Over the Rainbow’